Our awesome callers continue to call large western US cities.  It is clear that the word gets around.  I got a tip call from a woman in El Paso TX, who has frequently seen a woman that looks like Nancy at her church, St. Patrick's.  However, it appears that this woman converses extensively with the priest at the church, so it probably isn't Nancy.  The good thing to note is that people are out there looking!

I visited more hospitals last Friday, this time with Sgt. Mike Goldberg of the LAPD who is volunteering his off time to help.  As noted before, it is remarkable how much more helpful hospitals are when it is the LAPD asking!  We went to 4 hospitals, asking them to do the "non-standard" query of their admissions database outlined a couple of weeks ago, and I believe all 4 will do it (three already have).  Sgt. Goldberg and I were accompanied by a film crew from KCET.  Again, from a previous post - The KCET "SoCal Connected" is going to do a segment on the search for Nancy, and they have been filming various aspects of the search.

With the help of HASC, we sent an email to all of the IT departments of hospitals and emergency responders - but the email was from the Manhattan Beach Police Department - hopefully getting a little more attention.  So far, the MBPD has received a couple of calls asking if this was a legitimate request, and one, count 'em one, call from the Ventura County EMS saying that they performed the search and did not find anyone matching Nancy's description (to be fair, we did not specifically ask them to reply once they had completed the search unless they had some candidates).

Speaking of HASC (Hospital Association of Southern California - an advocacy group), they have invited me to speak to their senior staff tomorrow.  I have a couple of sets of charts - one specific to Nancy, and the other some ideas on how they might try to standardize handling of John/Jane Does, clearly based on our experience in interacting with the hospitals.

I have also spoken and been invited to speak again to the Manhattan Beach Citizen Emergency Response Team.  This is a group that Nancy belonged to, and they are ready and willing to help with the search efforts.

There is an updated version of the Efforts to Find Nancy on the right hand side of the blog ... a few additions in the last couple of months.

We ordered printing and addressing of 8,928 postcards yesterday.  These are going to all the residential care facilities in the 10 Southern California counties (at least, all of them that have an address the post office recognizes).

Here they are, but I'll try to put them over on the side too. 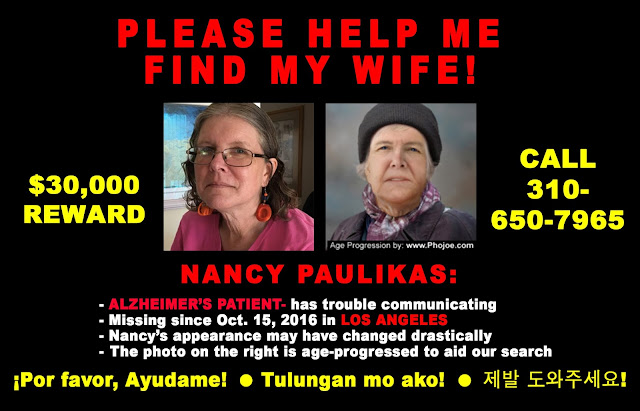 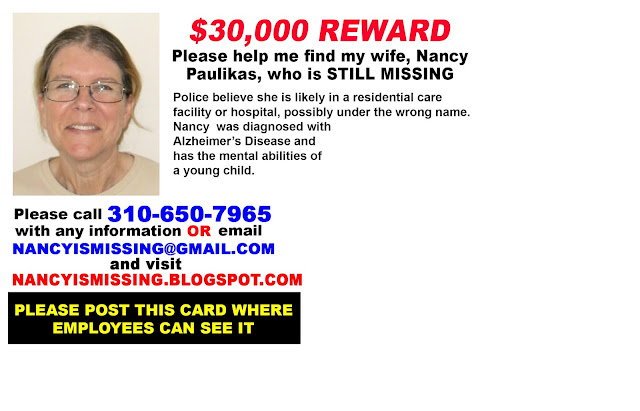 Link to Beach Reporter Article
Posted by Kirk Moody at 7:36 AM 1 comment:

Kirk and his team have worked with an artist to create an image of what Nancy might look like at this point.

The press has responded, with an article from the Daily Breeze yesterday, Friday 14 July.

This image will be included in an upcoming mailing to approximately 10,000 residential care facilities in LA and surrounding counties.

PLEASE encourage others to keep looking for Nancy! 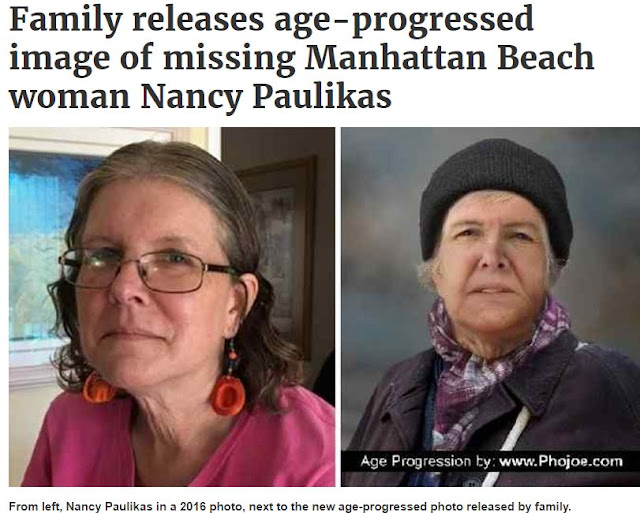 Link to Daily Breeze article
Posted by Matt at 8:57 AM 4 comments:

We received some excellent help from the head of IT at the Hospital Association of California (an advocacy group ... and I would name them, but I forgot to ask if that was OK).  HASC had previously put out an email to all of their IT contacts - 360 of them, in hospitals, fire departments, etc., asking them to perform a "non-standard" query, based on the supposition that Nancy would be unable to relate her name or any other identifying information.  They admitted, however, that these emails come from "ReddiNet", and may be largely ignored by the target audience.  It was suggested that they would get more people to open them if it came from the police, so Detective Rosenberger was enlisted and happily sent out the request.  At the bottom of this post are the types of queries I am asking of people.

Our indefatigable callers continue to call the police, public guardians, and adult protective services of other cities in the west.  About a quarter of these calls are exercises in banging one's head against the wall - the shear lack of compassion that some people exhibit is enough to make you give up on humanity altogether - however, another quarter are people that take their own initiative to share the information broadly and truly try their best to help.

Nancy's father read an article in the Los Angeles Times about how they are putting more resources into crews that "cleanup" homeless encampments.  He had the idea that we should get the information about Nancy out to these crews, so I reached out to the department head of LA County for this, and he took an interest and promised to bring it up to his staff for suggestions (I also left him with about 800 business cards with Nancy's information - one side English, one side Spanish).

We continue to try to get MediCal to look at their records.  To recap, the LA Fraud Investigation unit has been doing queries for us for months.  However, they changed how they did the queries to make it less time consuming.  Since they changed the query, they have had no candidates.  (This makes some of us that have worked with databases before quite concerned that the query needs to be tweaked).  We have tried to get the same thing going at the state level, but so far our efforts along these lines appear to show a lack of understanding and/or coordination with the LA group.

As I mentioned last time, we are working to create a postcard for another mailing.  We are working on getting a good-looking, eye-catching card with the right information, and to create a better mailing list (targeting care facilities).

Here is the type of database query I mentioned in the first paragraph:

Posted by Kirk Moody at 9:04 AM No comments:

Happy 4th of July everyone!

Richard Montgomery from the Manhattan Beach City Council called me and said that the council is interested in helping in anyway that they can.  They are going to create a "Nancy is Missing" screen shot for the dead times on their cable channel, and spread the word with the tools available to them.  Thanks to the MB Cit Council!

Joel Oiknine and Gordana Vukotich have also brought up Nancy to the Community Emergency Response Team (CERT - Nancy was very active in this organization).  I'll be speaking to them a couple of times later this month, and they may have ways of reaching out to other CERT organizations to help.

We have chosen an altered photo of Nancy done by PhoJoe Photo, and we are planning on doing another mailing that features this (along with other Nancy photos).  For this mailing, I believe I will outsource it to a company instead of hand assembly.

The callers are still trying to contact officials in cities outside of California.  It is certainly interesting how some of the police departments will "not accept" a flyer from us.  Some requiring the local police to do it (thanks to Detective Rosenberger who has agreed to reach out to these places individually).  And thanks to the callers for their continued persaverance!