LAPD Sergeant to Help with Search

Sergeant Mike Goldberg out of the Van Nuys division of the LAPD interviewed me today and is going to put some effort, along with some colleagues, into finding Nancy.  He has already visited an area in North Hollywood that has a significant homeless population and is bringing Nancy's story to the attention of the police that are most familiar with that community.

This is a tremendous development and we look forward to all that Sgt. Goldberg can accomplish.

Two Months after the completion of "Chocolate", posters of Nancy Paulikas appeared around LA. At 55 years old, with Early On-Set Alzheimers, Nancy had wandered away from her husband while visiting LACMA and was now nowhere to be found.

This uncanny parallel to Eve's story revealed the deafening realities within our fiction and encouraged the "Chocolate" team to join the search for Nancy, with a passion.

Nancy has now been missing for over 6 months. Her husband, Kirk Moody, attends our screenings with stacks of Nancy flyers in hand and ample support for artists who are helping to increase social awareness.

We ask you to help us find Nancy by simply sharing her images found at Nancy is Missing so that she can be recognized wherever she is.
#LetsFindNancy #MissingPersonLA #Alzheimers Alzheimer's Greater Los Angeles #share #repost #supportindiefilm #firstglancefilmfestival#bestdrama Andre Chesini Marcos Daniel Ferreira Dâmaris Pinheiro Joao Bounassar Bruna Nogueira

Photo from the screening of Chocolate 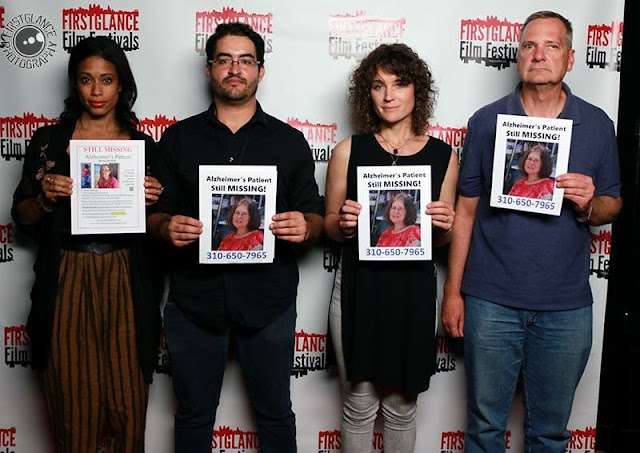 \
Here is photo from the screening of Chocolate at the FirstGlance Film Festival.at which Chocolate won for "Best Drama." From left: Amy Argyle, actress, Thiago Dadalt, writer/director, Piercey Dalton, who won for "Best Actress", and Kirk Moody, husband of Nancy Paulikas.
Posted by Matt at 8:41 AM No comments:

We just learned that Piercey Dalton won the "Best Actress" award for her leading role as Eve in the short movie "Chocolate" and the movie won in the "Best Drama" category!!!

This is wonderful news for Writer/Director Thiago Dadalt, for producer Dru Miller, and for the whole team that worked to make such a beautiful film (described in more detail in the previous post).

Again... it is just remarkable that this movie about a woman with early onset Alzheimer's that wanders off and is lost on the streets of Los Angeles was shot last summer and completed not long before Nancy went missing on October 15th.

Chocolate will be part of a film festival in NYC next week an then will go on to be screened at Cannes.

We wish the team all the best and thank them, again, for their efforts to help shed light on the plight of an increasing number of people around the world, and to their support in helping find Nancy Paulikas...

Screening on Saturday of a Remarkable Short Movie, "Chocolate... Not All Who Wander are Lost"

Kirk and a small group attended the public screening of the short movie "Chocolate" at the 17th Annual FirstGlance Film Festival Los Angeles.

The movie was written, directed, and edited by the very talented Thiago Dadalt and is about Eve, a woman with early onset Alzheimer's, who wanders from home, ending up in the homeless community in Los Angeles.  Eve is played with amazing sensitivity by Piercey Dalton and there are also very strong performances by Joao Bounassar, Amy Argyle and Talia Bacha.

Remarkably, this movie was shot last summer and completed not long before Nancy went missing on October 15th.

The movie was nominated in four categories for the London International Film Festival, and Amy Argyle won for best supporting actress.

Watching this movie was, frankly, very emotionally difficult as it reflected many aspects of losing Nancy.
But it is also an uplifting movie; it carries the message of the realities of Alzheimer's Disease in our society and how we can help prevent future wanderings and losses of loved ones.

Chocolate will be part of film festival in NYC next week, and then will go on to be screened at Cannes.
The hope on the parts of the producer and team is that they can turn this into a full-length movie, and Thiago is working on the script.

Today we met with Jenn Hardy, the Office Assistant for our California State Assemblyman, Al Muratsuchi.

We were looking for two things, either of which might result in better ways to help find missing people, especially those, like Nancy, who are suffering from a debilitating disease.
We are quite appreciative of the time that Ms. Hardy gave us and look forward to any progress she can make on either of these areas.
Posted by Kirk Moody at 7:26 PM No comments:

We updated the fliers that are accessible in the right frame of this blog, about half-way down.
Posted by Matt at 7:35 AM No comments:

Nancy Paulikas has been missing for six months and her family is still holding out hope of finding her.

Summary of Efforts to Find Nancy

We have put together a summary of the efforts undertaken to find Nancy.  You can find it in .pdf form, and it is repeated below.
Pdf version of Efforts to Find Nancy

Introduction Nancy Paulikas, a 56 year old Alzheimer’s patient, walked away from a family visit to the Los Angeles County Museum of Art (LACMA) mid-afternoon on Saturday, October 15, 2016. Family, friends, police and many volunteers have been searching for her since her disappearance without success.
Because so many new friends and observers have expressed an interest in helping we are providing the following account of the activities that have been undertaken to find Nancy. The list is by no means exhaustive, but it does highlight the principal efforts.
Law Enforcement Activity
Private Investigator
Community Awareness Efforts
Tip Tracking
Video Collection and Review
Homeless Communities
Media
They initially received feedback that their story was “impossible- people are found in a couple of days”; so Nancy’s story really validated their story line. Thiago Dadalt is creating a video specifically about Nancy. He is creating two versions, a very brief one for social media, and a longer version that we can share with news outlets and other places.
Hospitals
Residential Care Facilities
Government Support
Other Organizational Support
BOTTOM LINE-Despite all of these efforts, Nancy is still missing.
If you have ideas about other areas or ways to search for her, we are open to them.
If you would like to help us search for Nancy by making phone calls or distributing flyers to residential care facilities and/or hospitals, or doing something else, please contact us at
NancyIsMissing@gmail.com
And I would again like to thank ALL of the hundreds of people and organizations that have supported my effort to find my wife over these months since she went missing. The outpouring of resources, volunteer time, and support has been staggering and SO greatly appreciated by me and my team members.
Sincerely,
Kirk Moody, Nancy’s Husband

Ed Floven in the Beverly Press has another nice article

Beverly Press Article
Posted by Kirk Moody at 10:51 AM 1 comment:

"How's the search for Nancy going? and "What's the family’s state of mind?"... The two things that come up most frequently from visitors to this blog

Two of the things that come up most frequently from visitors to this blog involve the current status of the search for Nancy and the family’s state of mind.

Unfortunately, while we are actively continuing the search and have reached out in many, many different directions, we have still not turned up a single clue to her whereabouts.  Thanks to the ongoing commitment of the lead officers of the Manhattan Beach Police Department and the many dedicated volunteers who have given so much energy and so many hours, the search continues with visits and calls to the literally hundreds (thousands?) of facilities in Southern California where she might be being cared for under a Jane Doe or misidentified designation.

Kirk and Nancy’s parents want everyone to know how much they appreciate the outpouring of care and concern that has surrounded this impossible situation.  While frustrated and anxious, they remain fully engaged in the search process.  They are mindful of the need to take care of their own health during this stressful time and are working hard to do all of the appropriate things to make that possible.

With 6 months having passed since Nancy went missing we want to again ask all of you to help keep our search in the eye of the media, in the minds of care-givers throughout southern California, and in your hearts.

Jeanne Fratello Has a Nice Article in Dig MB

Dig MB Article
Posted by Kirk Moody at 9:49 AM 1 comment:

We have contacted the media outlets that have covered Nancy in the past and pointed out that Saturday will mark the six month mark.  In addition, we have upped the reward for information to $30,000.  Looking for an "Easter Miracle" that will help us find Nancy.

Another Very Nice Article in the Daily Breeze by Megan Barnes

Posted by Kirk Moody at 7:16 PM No comments:

March 2017: Elderly homeless woman in Santa Barbara reunited with children after a decade on the streets...

Here is an amazing, recent story from Santa Barbara about an elderly homeless woman being reunited with her three children after disappearing more than a decade ago.
"Kayannette Gabrielle went missing from her home in Valencia in 2006.  Her son, Brett Hanlon reported her disappearance to the Los Angeles County Sheriff's Department. Her information was entered into a statewide database and detectives followed leads for years."
CLICK HERE for article on finding woman missing for 10 yrs
Posted by Matt at 8:06 AM 3 comments: